Previous Sunday, on the 27th of September 2015, Paris has announced an official Car Free Day with aim to lower both the air and noise pollution levels. The ban of vehicles although did not cover the whole city has brought significant improvements. In the city center where all traffic was prohibited the amount of measured nitrogen dioxide was lower by 40% and noise levels decreased by 50%. Even in other busy parts of Paris, where traffic was only partially limited, the air pollution was lowered by 20%. 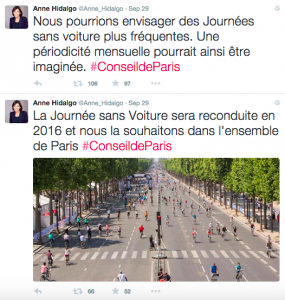 Paris Car Free Day was met positively by city inhabitants and as pronounced by its mayor, Anne Hidalgo, such efforts should be repeated more frequently.

Anne Hidalgo @Twitter posts:  “We should consider days without cars more often … perhaps even once a month” 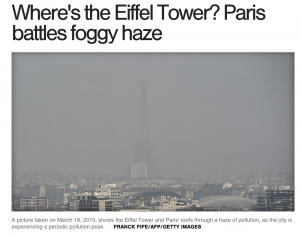 The air quality problem in this european capital is a persisting issue. Just lately, in March 2015 the pollution in Paris reached terrifying levels when the famous Eiffel Tower become almost totally hidden behind the smog. Many international media has pointed out that this was so far the most dramatic symbol of France loosing the battle against air pollution.

During last year Paris has broke the roof limits of accepted pollutants levels of benzene, ozone, nitrogen dioxide, and the fine particles PM2.5 and PM10 (as reported by Airparif).

Changing such trend is going to be a costly and rough process for Paris and de facto other similar european cities, but this is something that needs to be done. Just in a few weeks time Paris will host world´s biggest climate change conference COP21 where new international measures will be taken. Ironically, placing such conference in the hot spot of the problem might be just the best way of visualising the discussed issue.