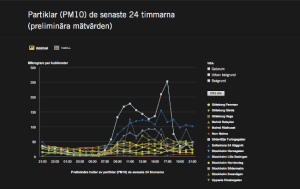 Graphical representation of the PM10 concentration in Sweden (source: swedishepa.se)

Dangers arising with increased air pollution are numerous (see our previous posts). Air particles coming mostly from industry and extensive transportation are reason to worsen health and life quality all over the world.

Unfortunately, problem awareness raises usually in late phase of the climate destruction. Often when it is too late and poor air quality is clearly visible and reached dangerous levels.

Air pollution sources can be often narrowed down to the industrial and urban regions of the country. However, dangerous air pollutants can be easily carried with the wind over long distances reaching the fragile natural areas, like forest, lakes and sea. They can enter the environment through the air or with the rainfall leading to for example acidification of the soil.

To check the real-time reports about local air pollution in Sweden follow these links: